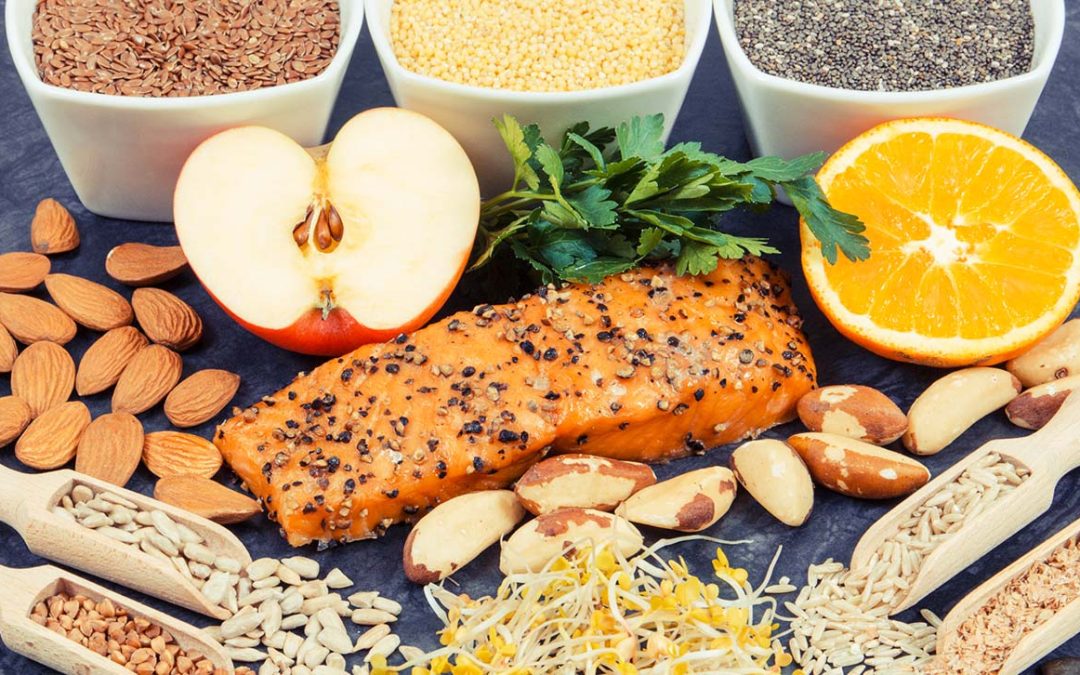 The thyroid gland plays a vital role in metabolism as well as how the body grows and develops. Like every organ, the thyroid requires vitamins and minerals to function. Six thyroid nutrients are particularly important for the gland to secrete the chemicals necessary for you to turn food into energy.

Two thyroid hormones — T-3 and T-4 — help regulate your metabolism, including weight, energy levels, internal temperature, heart beat pace, and cholesterol levels. Selenium is required to produce these hormones and, as an antioxidant, protects the thyroid from oxidative stress damage. The thyroid has the highest concentration of selenium in the body and low levels can affect the gland’s health.

Selenium sources: Brazil nuts, seafood, and organ meats are richest sources of this mineral. As nutrients in nuts are dictated by soil mineral content and other agricultural factors, selenium content in Brazil nuts can vary widely by growing location. Gorging yourself on Brazil nuts for fear that batch may have come from selenium-depleted soil can take an unpleasant when a nutrient-rich batch causes selenium toxicity. Muscle meats, dairy, and fortified grains are more consistent sources and far less likely to contain potentially toxic amounts. Selenium is often included in multi-vitamin supplements, like our Lypo-Spheric® B Complex Plus.

Risk factors for selenium deficiency: While living in regions with low soil selenium and following a diets consisting mostly of vegetables grown in selenium-depleted soil presents the greatest risk for deficiency of this thyroid nutrient, it’s rare in even in lowest selenium regions of North America. People with HIV or who are undergoing kidney dialysis are at risk for deficiency due to a combination of low intakes and high mineral losses.

Iodine is synonymous with thyroid nutrients

Iodine has one known job: supporting thyroid function. Thyroid hormones contain iodine and while too little makes it tough for the thyroid to do its job, too much is associated with autoimmune thyroid issues.

Iodine sources: Seaweed is the best source of iodine, but fish, other seafood, and eggs can be more palatable and convenient options. Dairy products like milk and yogurt are also iodine sources, but their content depends on whether the cows were fed iodine feed supplements and if iodophor sanitizing agents were used to during milk processing — neither of which are listed on the carton. Plant-based milk replacements contain very small amounts of iodine.

Many table salts are iodized, but not speciality salts like kosher, sea, and Himalayan varieties. Even though most salt in the American diet comes from non-iodized sources used in processed foods, most people in the US consume adequate iodine.

Risk factors for iodine deficiency: Pregnant women have greater iodine needs, and often don’t consume enough. Vegans and people with food intolerances that do not allow them to consume seafood, dairy, and eggs are at risk of deficiency. The risk for these people increases when consuming foods that contain goitrogens (including soy, cruciferous vegetables, and cassava) which interfere with iodine uptake in the thyroid.

Like in the immune system, just the right amount of this mineral is key to a healthy thyroid.

Zinc sources: While oysters have by far the highest content, consuming meats, fish, dairy, eggs, and other seafood is adequate to meet thyroid nutrient needs if you aren’t into shucking shellfish. Beans, grains, and nuts contain zinc, but the phytates in these plants interfere with absorption, making them unreliable sources. Adding fermented foods to your diet may increase zinc absorption. Zinc is common in supplements, like our Lypo-Spheric® B Complex Plus, and in lozenges.

Risk factors for zinc deficiency: People with gastrointestinal disorders or who have had bariatric surgery often have decreased zinc absorption and increased excretion due to inflammation. People newly diagnosed with celiac are often deficient and sometimes following a strict gluten-free diet is not enough to replenish. Vegetarians and vegans are at risk for deficiency due to low consumption of bioavailable zinc. Pregnant and lactating women have increased zinc demands and are thus at risk due to not knowing and/or failing to meet the requisite intake. And you can add zinc depletion from chronic alcohol abuse to the list of reasons not to become an alcoholic.

Without iron, the thyroid doesn’t work

The thyroid needs iron to utilize iodine and to convert hormones to their active forms. Without sufficient levels, dysfunction can occur. But, like the other minerals, it’s about consuming the right amount. Excessive iron intake — mostly through high-dose supplements — can damage the intestine and lead to other complications. These high doses can also interfere with zinc absorption, which your thyroid won’t appreciate.

Iron sources: Both plant- and animal-based foods contain iron, albeit in two different forms. Heme, from lean meat and seafood, is more bioavailable than non-heme iron, found in beans, vegetables, nuts, and fortified grains. Meat, poultry, and seafood can enhance absorption of non-heme iron, as can vitamin C. Phytates and polyphenols in grains, beans, and legumes can further interfere with non-heme iron absorption, so it’s important to properly soak these foods before consuming to remove as many antinutrients as possible.

Risk factors for iron deficiency: Pregnancy increases iron need, so women who do not alter their intake accordingly are at risk of deficiency. Regular blood loss — mostly in frequent blood donors and women with heavy menstrual bleeding — can cause insufficient levels of this thyroid nutrient. While people with cancer and heart failure may have more pressing problems, they are also at risk for iron deficiency. And, like other minerals, malabsorption can occur due to gastrointestinal disorders or surgery as well as long-term use of proton pump inhibitors.

Vitamin A helps the thyroid work

From regulating hormone metabolism to supporting iodine use, vitamin A is critical to normal thyroid function. Studies have shown vitamin A may improve thyroid health in premenopausal women and obese subjects after gastric sleeve surgery.

Sources of Vitamin A: In foods, vitamin A is available in liver, fish, eggs, and dairy and in precursor form in leafy green vegetables, orange and yellow vegetables, tomatoes, some fruits, and some vegetable oils. The most reliable vitamin A sources are from animals as plant-derived vitamin A precursors, which must be converted to vitamin A in the body, are often only absorbed at 10–30% compared to pre-formed vitamin A at 75–100%. Cooking can increase bioavailability of precursor beta-carotene.

Risk factors for vitamin A deficiency: Cystic fibrosis and some gastrointestinal disorders can cause pancreatic insufficiency, which impairs fat digestion, thus absorption of fat-soluble nutrients like vitamin A. Newly diagnosed celiac patients often have vitamin A deficiency, but that corrects itself with adherence to a gluten-free diet.

Researchers don’t know if this is a cause and effect relationship (and, if so, which is the cause) or if another factor is causing both issues, but low vitamin D levels are often found in people with low thyroid or overactive thyroid function.

Vitamin D sources: Very few foods aside from fatty fish — like salmon, tuna, trout, and mackerel — and their liver oils contain vitamin D. Mushrooms that have been exposed to UV light contain some vitamin D, as do fortified milk, plant milk, egg yolks, beef, liver, and cheese. The best source is sun exposure, which spurs production of vitamin D in the skin.

Risk factors for vitamin D deficiency: In the US, vitamin D deficiency is widespread, often due to limited sun exposure. If you’re inside all day, live in a climate that doesn’t get a lot of sun, or cover most of your skin when outdoors, you may not get enough UV light to make vitamin D. Furthermore, older adults and people with more melanin in skin have limited ability to synthesize vitamin D. Glass, sunscreen, cloud cover, and smog also interfere with the sun’s ability to penetrate the skin for vitamin D production.