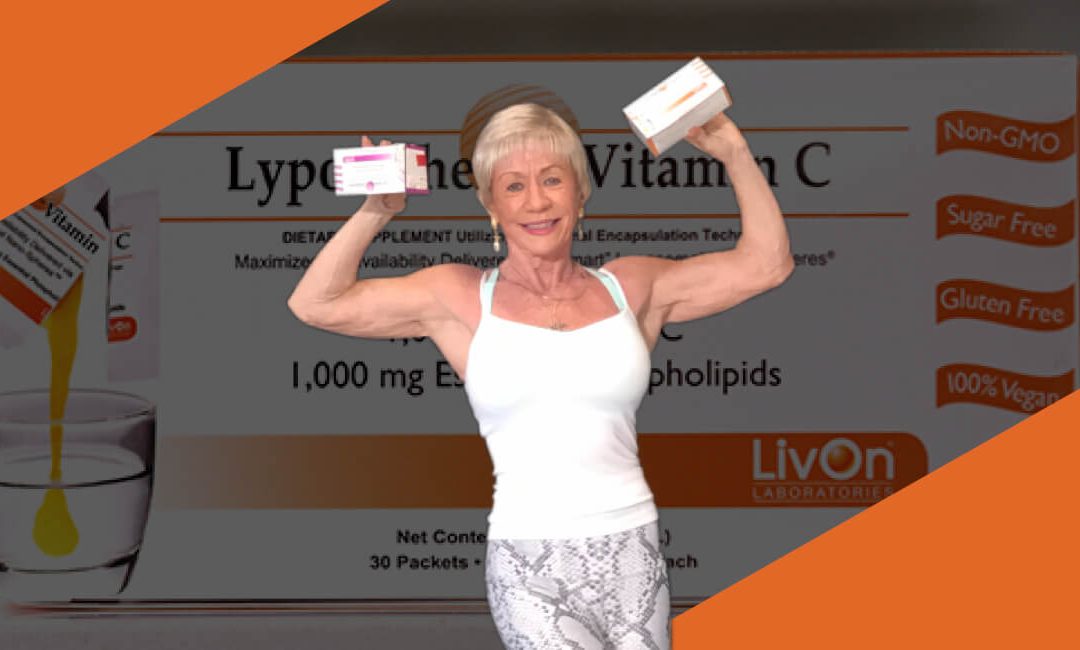 It’s just after 6 a.m. The sun hasn’t emerged over South Carolina and Iris Davis is in her kitchen. She’s taking her daily shots of Lypo-Spheric® Vitamin C and Glutathione before frying three eggs in coconut oil. Alongside a thick slice of homemade bread with fresh fruit baked into it and a cup of coffee or tea, that’s breakfast. And it’s the same every day before she hits the gym to start training her clients.

They start coming in at 8 a.m. Women trying to lose the stubborn weight that they’ve hidden for decades behind baggy clothes, senior citizens seeking better quality of life, and 22-year-old bodybuilders training for their first shows. They all depend on 75-year-old trainer and pull-up world record holder Iris Davis to achieve their goals.

That’s right, 75-year-old Iris Davis. She’s been training since she was 22, lifting heavy weights at the gym in an era when women just didn’t do that. Yet, it’s that lifelong commitment to her health that Iris credits for overcoming all threats to her wellness — from workout recovery to encephalitis that left her bedridden for two years in her late 40s to bouts of severe depression that plagued her throughout her life.

“I didn’t know I was saving my own life,” Iris says.

After the deaths of her infant child and first husband early in her adult life, she threw herself into training at the gym. It became her medicine for overcoming that devastation. And she’s stayed with that regimen and self-medicating with exercise to which she’s adhered for the next 53 years despite major changes in her life.

She moved from Ireland to the United States with her surviving son and about 16 cents when she was in her early twenties. Then she was back in the U.K., working for a bank in England before returning to the U.S. and competing in bodybuilding starting at age 60. She doesn’t see competing in the near future as she’s focusing more on training her clients and pursuing new activities (she’s just decided to take up Crossfit® training) that keep her feeling like she’s still 25.

“Self care” may be a buzzy Instagram term today, but it’s a real philosophy for Iris that has kept her healthy, happy, and in bikini shape through her mid-70s. When she’s at the gym, she’s in bright, fashionable workout gear with a full face of makeup. She’s “embarassed” if she doesn’t look her best.

“It’s my job to look good. I have to look the part to be able to do the job,” she says. If she looks good, she feels good, and she performs better both as a trainer and while training others.

And the self-care extends to mental health. When she’s at the gym, she forgets everything else.

“One day I left my car running for three hours!”

In this day of constant distractions — push notifications commanding our attention to the trivial, the emphasis on multitasking — Iris ensures that her full attention is on her clients. This includes working alongside them to demonstrate proper technique. Whatever her clients are doing, Iris is doing it too.

Around 10 or 11 a.m., Iris refuels with one or two bananas depending on how hungry she is. That controlled spontaneity is indicative of her flexibility regarding diet. She prepares as much as possible by bringing her own sandwiches, protein bars, and fruit to the gym and other engagements at which she knows that hunger will strike.

“I have been known to eat McDonald’s,” she says. “The worst thing you can do is starve. Any food is better than no food.” She says she’s not too strict and that she’ll go out for a nice meal. But she’ll weigh herself the next morning and take any extra pounds off right away. And because of that adherence to a healthy lifestyle, it’s never been more than one or two pounds.

Around 1 p.m., she eats two Kind bars to replenish her energy before starting her training session. Each day Iris focuses on a different part of the body, but every session includes an hour of core work. She puts on her headphones and gets creative. Did you know that if you stand up at a bicep machine and push it back, it becomes a shoulder machine? The gymnastics rings suspended from the ceiling aren’t just for elite male gymnasts to perform the Iron Cross; they’re also ideal for testing the limits of your abdominal strength.

Challenging her own expectations of what her body is capable of doing is what has enabled Iris to perform feats of athleticism in her 70s that elude most people in their 20s.

Several years ago, a fellow gym-goer challenged her to do a pull-up. While he believed that she was capable, Iris didn’t know she could do it. So, when no one was around, she gave it a shot. She did 10. By performing 21 consecutive reps on her 74th birthday, she earned the world record for women over 60.

“Women have no idea how strong they are,” she says.

Iris trains every day and says she’s never had an issue with recovery. “The fitter you are, the quicker you recover,” she says. Even so, she knows when to call it quits for the day. She’s home by 3pm.

“I pay homage to my age,” she says. “My routine is watch Judge Judy.” Born in Ireland and having spent a significant part of her life in London, she takes her version of high tea with some brie cheese and another slice of her homemade bread.

Dinner is around 6:30 or 7 p.m. She sits down with her husband for one of the two staples:

Half a chicken breast and a large salad with grapes, granola, tomatoes, almonds, and dressing.

Her rules? No sauces, no desserts, no crackers. And, up until a couple months ago, no supplements.

That all changed when she got involved with Aging Evolution and they turned her onto their antioxidant blend. Then we heard her make an appearance on Superhuman Radio. Iris told her story of using fitness to overcome depression after almost unthinkable tragedy in her early twenties and rack up 11 bodybuilding titles after the age of 50. The LivOn team sent her some Lypo-Spheric® Vitamin C and Glutathione to do just what the products are meant to do: supplement a healthy lifestyle.

Now she says, “I wouldn’t want to stop taking them.” She’s “bouncing off the walls.”

And that helps with the dance parties.

“My go-to pleasure is to dance round my house or on my deck to loud, loud, loud club music. The UPS driver has a great laugh when he drives by and sees me on my deck,” Iris says.

At bedtime, right before she’s about to go to sleep, Iris has a shot of vodka and water.

“Well, a gal has to have at least one vice,” she says.

It’s how she “chooses to live” and how she keeps “the same measurements and weight at age 75.”

“I can definitely say it’s been worth it,” Iris says. “I never knew all those years ago that today I would be inspiring thousands of followers and manage to work at this age. I’m loving every second in my life.”