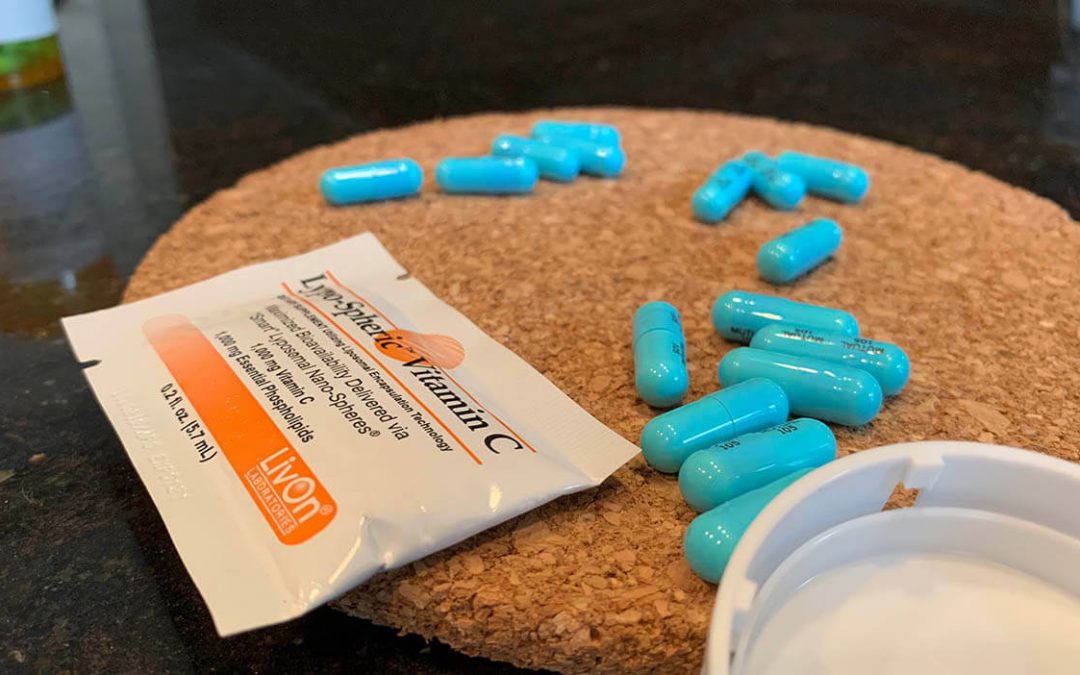 Several ubiquitous drugs deplete Vitamin C. This powerful antioxidant is already difficult to absorb at the levels many doctors believe to be ideal. If you’re not supplementing, taking the following medications could put you at risk for unpleasant Vitamin C depletion symptoms.

Proton pump inhibitors lower stomach acid, and the process lowers the concentration of Vitamin C in gastric juices where it is normally actively secreted4. The pH increases while decreasing the active form of Vitamin C, the form that performs important antioxidant functions. Scientists theorize that this depletion could be due to the PPI increasing Vitamin C metabolism5.

Some research suggests that oral contraceptives containing estrogen increase Vitamin C metabolism, thus decreasing the levels of Vitamin C in platelets and some white blood cells. Others hypothesize that the medications change the way tissues take up Vitamin C. While the depletion caused by oral contraceptives may not be a significant threat to most healthy women, study authors warn that “the situation may be different for patients who have poor diet, unhealthy habits or a pathology of malabsortion (sic).”6

As diuretics work by increasing urine production, it’s no surprise that they can increase excretion of the water-soluble nutrients your body can’t store. A limited number of studies confirm that these medications deplete Vitamin C7.

While these symptoms are extreme, it is much more common to experience sub-optimal levels of Vitamin C, especially when taking medications. These low saturation levels can lead to increased oxidative stress, which may not manifest itself in obvious physical symptoms immediately.

What you can do about drug-induced Vitamin C depletion

Medications cause your body to produce unstable, potentially damaging free radicals. When you have more circulating free radicals than antioxidants — like Vitamin C — that neutralize them, oxidative stress occurs. This condition causes cascading cell and tissue damage and weakens the immune system.

Minimizing your exposure to these risks minimizes your ability to produce free radicals.

Vitamin C is difficult to absorb at higher doses, as certain proteins are needed to transport the Vitamin C out of the intestine to the bloodstream and then into the cells. Since these proteins also transport glucose, they are scarce. The body excretes all the Vitamin C these proteins can’t transport, a common occurrence in traditional oral supplements like tablets and powders.

Liposomal encapsulation provides a better way to absorb Vitamin C as it does not rely on these transport proteins. Liposomes carry Vitamin C from the digestive system to the cells where they assimilate into the cell membrane, allowing you to absorb more Vitamin C.

1 Cohen, Suzy, RPh. Drug Muggers: Which Medications Are Robbing Your Body of Essential Nutrients—and Natural Ways to Restore Them. Rodale, 2011.