Antinutrients: What are they and should you be concerned? 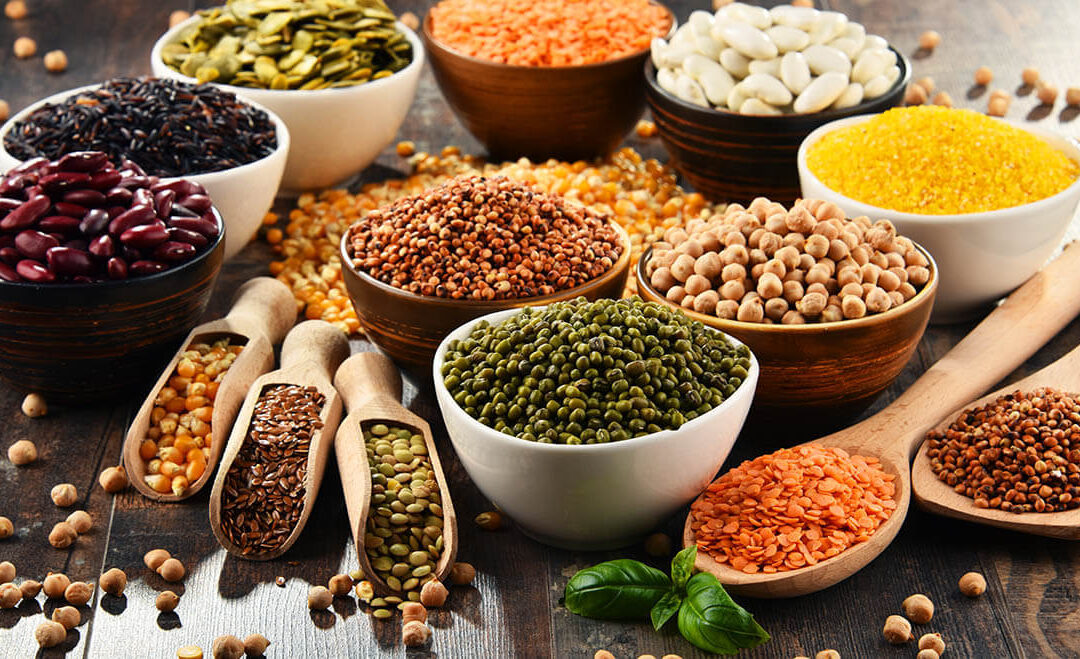 What are antinutrients? Antinutrients are compounds found naturally in plants that can interfere with your ability to absorb certain nutrients. Contrary to their moniker, antinutrients are not harmful to most people when consumed in amounts found in foods, and they are often neutralized by normal food preparation. You can also avoid any negative effects by learning how to plan your meals around compounds that don’t play well together.

Most commonly, antinutrients interfere with absorption of minerals magnesium, calcium, zinc, potassium, and iron. They are most often found in grains and legumes, but also in tea, wine, nuts, fruit, and leafy greens.

Gold-standard human clinical trials on antinutrients are limited with much of the research purporting their anti-nutritional effects having been conducted on animals consuming these substances in unrealistically high amounts in isolation from the other bioactive compounds in foods that effect how antinutrients behave in the body. The results of observational studies on humans who incorporate these antinutrient-rich foods in their diets are far less concerning. Because these so-called antinutrients occur in nutrient-rich foods, their benefits outweigh their possible detriments to nutrient absorption.

Also called the less shocking phytonutrients, antinutrients are substances found in plants that can interfere with absorption of minerals magnesium, calcium, iron, potassium, and zinc. Plants evolved these compounds for their survival. For example, certain antinutrients influence the taste of the plants, thus making it unappetizing to insects. Antinutrients are a wide descriptor for several substances that have different effects on the body.

Consumption of raw or inadequately cooked legumes containing these proteins can cause food poisoning. While isolated lectins can have adverse effects when administered to lab animals, clinical human trials using cooked beans containing lectins do not exhibit the same results.

Legumes, nuts, cereal grains, seeds, fruits, and vegetables produce these proteins to defend against fungi, mold, and insects. The amounts humans consume in fruits and vegetables are insignificant. Whole grains and raw legumes contain more concentrated amounts. However, because plants evolved lectins to fight off environmental threats, the lectin content of these plants will vary by cultivation area. There is no scientific concern about lectin consumption in fruits and vegetables, only the types occurring in grains and legumes.

Normal preparation methods reduce or eliminate lectins. Soaking, boiling, fermentation, germination, and canning reduce the lectin quality in foods. So, if you’re eating canned beans or following the directions on the packages of your legumes, you’re minimizing any risk. The well-documented cases of food poisoning linked to eating high-lectin foods are due to improper preparation that is not sufficient to eliminate or reduce lectins.

“In their whole and cooked form, there is currently no strong evidence from human trials to support the claim that lectin-rich foods consistently cause inflammation, intestinal permeability, or nutrient absorption issues in the general population,” write the authors of a comprehensive 2020 literature review.

Of all the anti-nutrients, oxalates are often viewed with the most concern. Formed in plants for their own protection, oxalates interfere with calcium absorption in humans.

Because they bind with calcium, they can be a culprit in kidney stone formation. When there is too much waste in urine and not enough liquid, crystals can form. Oxalate that binds to calcium is a common cause of these crystals, also known as kidney stones. While a low-oxalate diet is often recommended to people who suffer from kidney stones, very few health professionals advocate the general population to avoid oxalate-rich foods, which include spinach, sweet potatoes, beets, lentils, and tea.

And it’s not all that cut and dry. Dehydration, obesity, IBS, gastric bypass surgery, and overconsumption of salt, sugar, and protein are all risk factors for kidney stones. According to multiple dietary pattern NHS (Nurse’s Health Study) analyses, researchers found only a modest association between oxalate consumption and kidney stone formation. Participants who ate closest to the DASH diet — which is high in oxalate-containing foods like vegetables, nuts, and whole grains — had a 40–50% lower risk of kidney stone development. Researchers say this could be due to the synergistic effect of the other nutrients in these foods, like potassium, calcium, and phytate.

Oxalate is water-soluble, so boiling, soaking, and steaming can reduce oxalate content in foods. Researchers also suggest pairing high-oxalate foods with calcium to offset any inhibition.

These substances found in cruciferous vegetables — like broccoli, Brussels sprouts, kale, and cabbage — can inhibit iodine uptake in the thyroid. Glucosinolate content of each food can vary widely by soil condition, growing location, storage time, and other factors. Cooking and fermenting may also lower glucosinolate concentration.

In humans, some epidemiological studies link high-gluconisolate food consumption to thyroid dysfunction in people who have low iodine intake. Their effect on the general population that has normal thyroid function and consumes adequate iodine is mostly neutral, though there are some conflicting findings. Since these foods contain so many other beneficial compounds, scientists believe they nullify risk from consuming glucosinolates. For those with or at risk of thyroid disease, researchers recommend cooking glucosinolate-rich foods with iodized salt to avoid reduction in thyroid iodine uptake.

These plant compounds have structural similarities to estrogen, enabling them to bind to estrogen receptors and modulate estrogenic activity. While soy products have the highest quantity of these compounds, they are also found in flaxseeds, sesame seeds, garlic, olive oil, and some dried fruits.

Their estrogen modulation has been a cause of concern. Some studies found favorable effects of phytoestrogen supplementation on menopause symptoms, but a recent review declared the overall results of all studies inconclusive as absorption and metabolism of these compounds can vary by person. No evidence has demonstrated a link between eating phytoestrogen-rich foods and developing estrogen-related cancers. Some studies even found an inverse relationship between phytoestrogen consumption and cancer risk. Similar results were found for cardiovascular disease. The most significant endocrine disruption per the research is in soy infant formula, which researchers believe is due to babies’ small size and undeveloped digestive tract coupled with pesticide residue in these products.

Like the other anti-nutrients, researchers say that any ill effect of these substances can be nullified by all the beneficial substances found in the same foods. They say incorporating these foods into a healthy diet should not be a cause for concern.

Also known as phytic acid, this compound occurs in plants to store an antioxidant energy source. Human enzymes cannot digest phytates, so consumption can decrease mineral bioavailability in diets that consist primarily of phytate-rich foods. This is mostly a concern in the developing world where diet is predominantly grains and legumes and where zinc deficiency is common. Ensuring adequate mineral intake can mitigate any negative effects of phytates. For people with high-phytate, plant-based diets, it is often recommended to increase zinc intake and to supplement vitamin C or eat vitamin C-rich foods when consuming iron-containing plants as the vitamin supports absorption of the non-heme iron from plant sources.

Like other antinutrients, phytate content varies by soil conditions. Normal food processing reduces phytate content in many grains, legumes, and seeds. Soaking, while effective in reducing phytate, also reduces zinc and iron content as the soaking water leaches these water-soluble minerals out of the grains. Cooking the grains in the soaking water helps the food recover the minerals.

While interference with mineral absorption can be detrimental, it can sometimes be helpful. Heme iron, the type found in meat, is linked to gut problems. Phytate acts as an iron regulator, reducing the possible damage of too much iron. You may have heard to eat leafy greens with red meat for digestion. This is part of the reason why that recommendation exists. As phytate also acts as an antioxidant, researchers conclude that the benefits of a colorful diet that include phytates far exceed the risks of interference with mineral absorption.

Of all the antinutrients, tannins — a wide class of polyphenol compounds — appear to be the least worthy of that pejorative. Tannins are found in fruits, tea, dark chocolate, and a bunch of other foods often regaled for their antioxidant value. When animals consume tannins in isolation in ludicrous amounts that not even the biggest tea-guzzling rat could reasonably consume, they can reduce iron absorption. In observational human studies, there is no correlation between tannin food consumption and iron deficiency. And again, any effects on iron absorption can be mitigated by including a whopping 30 mg of vitamin C when you eat these foods. Luckily for you tannin fiends out there, many of these foods naturally include vitamin C. Some studies advise iron-deficient females to consume tea between meals instead of with meals to avoid any possible interference with iron absorption.

Why some people in the health and wellness community publicly vilify these nutrients is a matter of speculation. Is it to sell you on their diet plans and supplements? Is it to get more clicks to their articles and increase their public profiles? Is it to scare you into an emotional state in which you make impulsive buying decisions? Is it to fight their battle against the other side of the meat vs. plant-based diet war? We don’t know. All we have is the observational studies on humans eating properly prepared foods in normal amounts that say tannins, oxalates, phytates, phytoestrogens, lectins, and gluconisolates are not the nutritional boogeymen that some claim.

If you’re trying to live healthier, the general scientific consensus is that so-called antinutrients should be at the bottom of your list of concerns. Normal food preparation, supplements, and smart food pairings mitigate any depletion. And, do you know what is scientifically shown to deplete minerals and antioxidants? Stress.