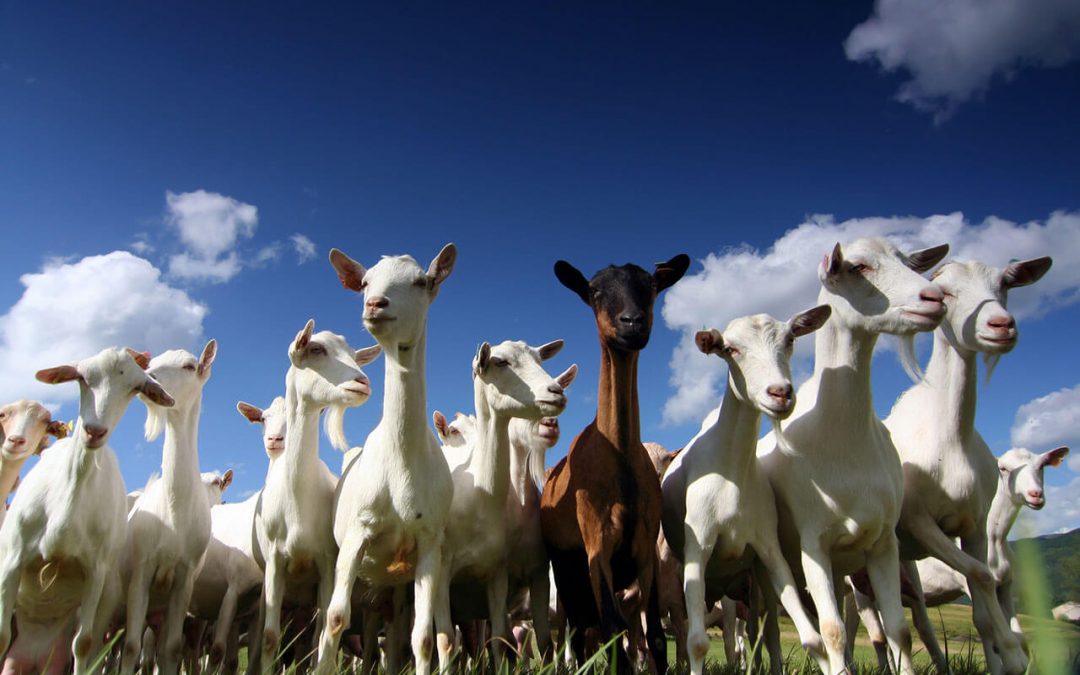 A typical 155-pound goat can produce more than 13,000 milligrams of vitamin C daily. As a comparison, the recommended dietary allowance for humans of vitamin C proposed and used by nutritionists, is 90 milligrams. What can we learn about optimizing our health from goat vitamin c production?

If goats are capable of producing their own ascorbic acid, why don’t humans? To see an infographic of the evolution of vitamin C synthesis, scroll to the bottom.

The requirement of ascorbic acid is a common property among living organisms. It has long been considered that all animals with the exceptions of guinea pigs, monkeys, and humans can produce their own vitamin C. Scientist have extensively studied the human genome and identified the defective gene for the synthesis of the active enzyme protein, L-gulonolactone oxidase or GLO (Stone 1979). This mutation is said to have occurred some 60 million years ago. The absence of GLO in the human liver blocks the conversion of glucose into ascorbic acid leading to an illness known as Scurvy (Inborn error of carbohydrate metabolism).

Evolution and the synthesis of Ascorbic Acid

Scientists believe that the ability to synthesize ascorbic acid began in the kidney of amphibians and was transferred to the liver of mammals like the goat. This biological trait disappeared from the guinea pig, flying mammals, the monkey, and man (Chatterjee et all 1975). Other notable animals that do not synthesize vitamin C are insects, invertebrates, and fishes. Some question whether ascorbic acid is an essential requirement for these species. The need for ascorbic acid may be very small for these species therefore they may supplement via their diet to maintain the proper levels of ascorbic acid. Although they can produce some vitamin C, domestic dogs and cats make much less than wild animals. This may explain why pets eventually suffer from the same diseases as humans.

The ability to synthesize vitamin C was somehow linked through evolutionary development. The step from the aquatic to the terrestial mode of life was a profound change involving a tremendous range of adaptations under strong selection pressure (Chatterjee et all 1975). This would explain why under stress goats were able to produce a higher level of ascorbic acid (vitamin C) than when unstressed (Stone 1979). As a biological defense mechanism, during times of stress ascorbic acid would be created in massive amounts. The beneficial effect of ascorbic acid in stress is now a well-established fact. When facing significant health stresses, C-making animals can dramatically increase ascorbic acid production by as much as 13 times normal levels. This could explain why wild animals tend to remain vibrantly healthy until they succumb to old age. (Levy 2011)

In spite of all this evidence, the recommended dietary allowance remains extremely low. This highlights the need for humans to supplement vitamin C. Is it possible that nature knows something the U.S. Government doesn’t?

Pro tip: Refrigerating your Lypo-GSH will help all

Are you getting enough B vitamins to support your

When your New Years resolution is to do more yoga,